With a cold it often happens that you also hear less well. One or often even two ears are then blocked. To be precise, your ears are not blocked themselves. Your middle ear – the space directly behind your eardrum – is connected to your pharynx by a thin channel called the Eustachian tube. In a cold, the lymph nodes at this channel swell, as a result of which the channel is closed, as it were. This can give you the feeling that your whole head is ‘hidden’.

What is the cause of a cold?

There are hundreds of different types of viruses that can cause a cold. Because of this, we are unable to build up immunity against colds. You can catch the viruses in busy and poorly ventilated areas, for example on the train, in the office or at school. Due to the poor ventilation you breathe in contaminated air. You can also contract a virus because, for example, you shake a hand to someone who has just blown their nose or coughed into their hand. So wash your hands! 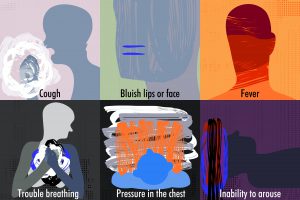